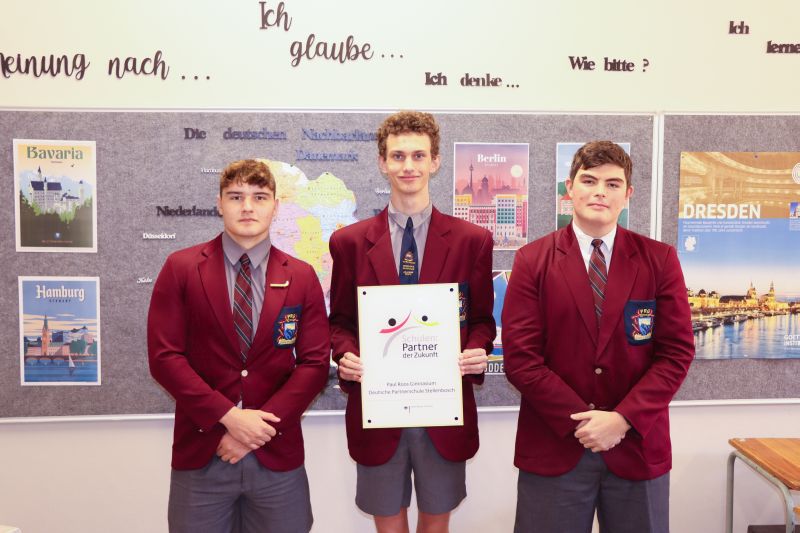 The National German Olympiad for South African schools takes place annually in October at various centres including Pretoria, Johannesburg, Bloemfontein, Vryheid, Hermannsburg, Bethlehem and Cape Town. It is specifically for grade 10 learners who take German as a subject.  The exam consists of four parts: listening comprehension, reading comprehension, language modules and written expression. Topics to be prepared by the participants for the exam included friends, family, home, free time, hobbies, food and drink, festivals, school and the weather.

Last year 39 participants took part and Nicolas won the Olympiad with an excellent mark of 98%.

In addition, two other PRG German learners, Sebastian Claassen and Christian de Villiers received full bursaries from the Goethe Institute to attend a course in Goslar, Germany. Learners between the ages of 16-18 with German as a subject can apply by writing a motivational letter followed by an online test conducted by the Goethe Institute. Both learners achieved a level B1 qualification. The grade 11 learners will leave for Germany on the 2nd of July and return on the 24th of July.

Paul Roos has been a PASCH-Schule since 2008. Our German learners take part in numerous PASCH projects. The summer camps, where students can spend time in Germany during the German summer, are particularly popular. PRG also has an exchange programme which allows the school to work closely with a school in Poland and organise annual trips. The Goethe Institute enables learners to write certificates on A1, A2 and B1 levels. The boys can use this certificate to study in Germany or simply include it as a valuable addition to their CVs. Moreover, The Goethe Institute has gifted the school (German learners) laptops and iPads which they use for educational purposes in the classroom.

Left in the picture is Christian de Villiers Christian, in the middle is Nicolas Smit and right is Sebastian Claassen.