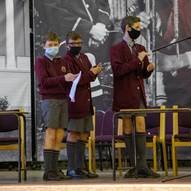 The Paul Roos team will be competing in On the Tip of the Tongue, Radical Debating, the Stellenbosch Eisteddfod, Paarl Valley Eisteddfod, Helderberg Eisteddfod and the Tygerberg Eisteddfod. The team is honoured to have a professional coach for workshops.

Something to look forward to is the team’s participation in the Moot Court Competition. This is a legal based style of debating and focuses on those learners who want to follow a career in law. There are a number of rounds. The learners write essays in the first round and if their essays are chosen, then they go through to the magisterial court in Bellville to argue their case in front of a real judge. This is open to the entire province but if the learners come in the top three then they will be flown to Johannesburg to compete against learners from all over South Africa.

With regards to debating, Paul Roos holds the Boland League which includes all schools (both private and public) including the areas Somerset West, Strand and Stellenbosch. This league is followed by the provincials which takes place in Cape Town. Adjudicators from Stellenbosch University is running the league.